Because hyperdensity — defined as density sufficient to support subways — contributes to the health, prosperity, and sustainability of cities, the densification of our built and social environments will to a large extent determine our strength as a nation. [1] Compared to most forms of human habitation, dense cities are the most efficient economic engines; they are the most environmentally sustainable and the most likely to encourage joyful and healthy lifestyles. So, how do we build delightful cities that make us more prosperous, ecological, fit and equitable? Here I wil lay out the factors that impede hyperdensity in our cities today, and the conditions necessary to create hyperdense environments in the future, including great design, responsible preservation and sound urban planning.

Sound urban development is the lynchpin of the hyperdense environment. Yet public advocacy for high-density development is extraordinarily low, primarily because its merits are misunderstood. Even among those who appreciate cities, there is enormous confusion about how best to build density. This is largely because the rationale for hyperdensity is often lost on those who should be its strongest advocates. Paradoxically, many of America’s so-called urbanists — broadly defined as urban planners, architects engaged in city building and urban theorists — tend to be enthralled with density yet enraged by real estate development. In fact, today it is a common trope in most schools of architecture and urban planning to believe that density is good but development is bad.

Instead, many urbanists consider European capitals such as Paris and Barcelona as the exemplars of “good density.” And, indeed, with city centers that support mass transit and walkable neighborhoods built at more than 80 units per acre — as is the case in Paris — these are some of the most densely built environments in the world. [2] Since they achieve these densities without, as some would say, ugly skyscrapers built by ugly developers, these cities represent the meritorious urbanity — commonly known as “low rise, high density” —  championed by the design and planning fields.

However, these fields tacitly or explicitly consider the growing hyperdense cities of Asia as embodiments of “bad density.” They generally deride places such as Tokyo, Hong Kong and Singapore as being too congested and characterless, the products of mindless real-estate development, inept urban planning and, of course, impoverished (read, non-Western) civic culture. Implicit in such parochialism is the proposition that only Western civilization can — and will — produce superior urbanism, indicating a willful contempt for the fact that many Asian cities are outpacing European capitals not only economically but also in terms of cultural production, mass transit, environmentalism, racial integration and other key metrics. [3] It is unrealistic and irresponsible for any true urbanist to embrace European capitals as models for future development when they are among the most segregated urban centers on earth and have increasingly unstable finances characterized by debt-driven grands projets. END_OF_DOCUMENT_TOKEN_TO_BE_REPLACED

Slums, shanty-towns, favelas – they are all products of an exploding migration from rural to urban areas.  Over the last half century, people living in or near metropolises has risen in proportion to the global population.  Migrations from rural areas to urban areas have grown exponentially as cities have developed into hubs of economic activity and job growth promising new opportunities for social mobility and education.  Yet, with all these perceptions holding fast, many people who choose to migrate find themselves in the difficult circumstances of integrating into an environment without the proper resources to accommodate the growing population.  Cities, for example, like Mumbai, India’s largest city and 11th on the list as of 2012 with a population of an estimated 20.5 million.  According to a New York Times article from 2011, about 60% of that number live in the makeshift dwellings that now occupy lucrative land for Mumbai’s developers.

END_OF_DOCUMENT_TOKEN_TO_BE_REPLACED

Milan is one of the most polluted cities in the world – the Bosco Verticale project aims to mitigate some of the environmental damage that has been inflicted upon the city by urbanization. The design is made up of two high-density tower blocks with trees and vegetation planted on the facade. The plants help capture CO2 and dust in the air, reduce the need to mechanically heat and cool the tower’s apartments, and help mitigate the urban heat island effect experienced in the city – particularly during the summer when temperatures can reach over 100 degrees.

The two towers measure 260 feet and 367 feet tall respectively, and together they have the capacity to hold 480 big and medium size trees, 250 small size trees, 11,000 ground-cover plants and 5,000 shrubs (that’s the equivalent of 2.5 acres of forest). The types of trees were chosen based on where they would be positioned on the buildings’ facades and it took over two years of working with botanists to decide which trees would be most appropriate for the buildings and the climate. The plants used in the project were grown specifically for the building, pre-cultivated so that they would gradually acclimate to the conditions they would experience once placed on the building.

Given the lack of green space in the city, Milan’s environment does not promote biodiversity. The new plantings will provide an urban eco-system able to support the presence of birds and insects. Bosco Verticale has the potential to balance out the city’s environmental damage and to create a self-sufficient ecosystem.

END_OF_DOCUMENT_TOKEN_TO_BE_REPLACED

Not a curve out of place

Architects are rethinking mosque design. Just not too big, please 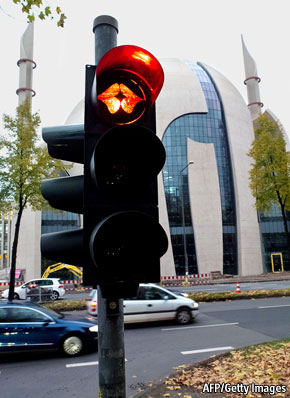 TO SOME it resembles a budding flower; others see a spaceport. The building that draws stares in the German city of Cologne is a new mosque, under construction since 2008, and one of a growing crop in countries where a large Muslim presence is new. America’s mosque count rose from 1,209 to 2,106 between 2000 and 2010. In both France and Germany 200 new ones are under way—a 10% increase.

The growth spurt has stoked xenophobia and sparked protests. But the innovative architecture of some new mosques also challenges stereotypes about a faith hidebound by history.

Germany’s new mosques have the liveliest designs in Europe, according to Azra Aksamija, an architectural historian at the Massachusetts Institute of Technology. The mosque in Moers, on the banks of the Rhine, looks like a dazzling jewellery box. The Bavarian city of Penzberg boasts an award-winning cubic design. Those elsewhere are striking, too: a blue dome encased in a latticed cube will soon lick the sky of the Slovenian capital, Ljubljana. Australia’s first modern mosque, in Melbourne, is eco-friendly. Cool blue light shines through the glass roof; ventilation shafts substitute for air-conditioning.

Muslim scriptures are laconic on mosque design. The holy building must only face Mecca and be “guarded from enemies”. That gives a free hand to experimental architects and adventurous clergy. In Albania’s capital, Tirana, BIG, a Danish architectural firm, is erecting a mosque with walls like breaking waves. Their clever geometry helps it face Mecca—inconveniently askew from the city’s north-south grid layout.

Read the entire article at : http://www.economist.com/news/international/21569387-architects-are-rethinking-mosque-design-just-not-too-big-please-not-curve-out-place

Megastructures are the Shopping Malls of the Avant-Garde 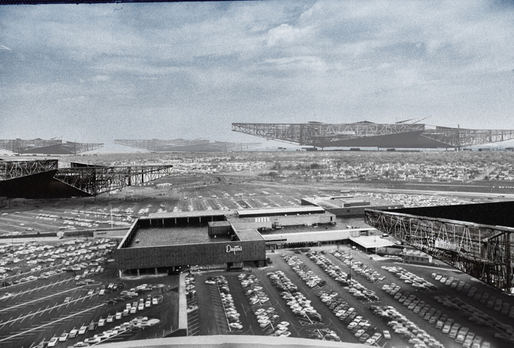 What About ideal cities, and counter revolutionary master plans?

Avant-Garde
The avant-garde is a paradoxical state. In order to exist, it relies on its incongruous condition of being both fundamentally contemporary and ahead of its time. A conceptual palimpsest, the avant-garde requires writing its history over its own past keeping a vulnerable balance between present problems, and possible future solutions. All about contextualizing the perfect timing, what happens when the avant-garde goes out of sync; when its solutions are overlooked for being too premature, or ridiculed for being delayed?

In the past century alone, the avant-garde was victim of two untimely appearances. In the first one, its proposals arrived too early; the world was taken aback by the boldness of its ambitions, by the audacity of its delirium. In the second coming, the avant-garde was too late. Here its stratagems were on a futile mission of inventing a program that already existed.

These consecutive setbacks have concealed the potential of  a parallel form of urban intelligence that not only is able to complete even the most ambitious truncated plans of the avant-garde in Europe, but that can also propose and achieve a set of alternative and original forms of urbanism. Can a genealogy of key events in the 20th century reveal the potential of this parallel non-European universe, and its relationship to the avant-garde as we know it?

Le Corbusier 1922
In 1922 Le Corbusier presented the first of his “ideal” cities.  La ville contemporaine pour trois millions d’habitants was an urban layout of cruciform skyscrapers, housing slabs and a carpet of parks intersected by juxtaposed grids of car infrastructure. In this urban plan Le Corbusier was not only aspiring for a greener, denser, centralized, bureaucratic, car oriented city, but the plan suggested the ideal conditions for Modern Architecture to flourish.

The Ville Contemporaine was like an abstract diagram. When the modernist plans started to take shape on real cities, first in Paris with the Plan Voisin (1925), then in the rest of the world with the Ville Radieuse (1935), the image of Le Corbusier oscillated between a visionary and a madman. His preoccupations were clearly fundamental problems of his time, but the formalization of his ideas were not always welcomed. Even if the cities of his time had needed more hygienic and organized schemes, buildings that were more suitable to live in, collective housing that distanced itself from the Haussmanian family flat and an overall vision that….

We live in a state of pervasive anxiety. Every day we are confronted with environmental problems: the energy crisis, pollution, decreasing biodiversity, climate change, new epidemics, the externalities of industrial production and consumerist lifestyles. We perceive our bodies as constantly at risk (from sources difficult to pinpoint) of contamination and disease. This increasing concern and obsession with health and well-being, mainly among urban populations in the West, is triggering an inevitable process of medicalization; ordinary problems are increasingly defined in medical terms and understood through a medical framework. [1]

We are so carried away by the idea of health that we have created a new moralistic philosophy: healthism. [2] Health is no longer identified primarily with the absence of illness, but with a state of general well-being concerning all types of functioning, from physical and biological to social and cultural. Nevertheless, our ambition for total well-being is fragmented and parcelled out through disconnected policies and actions. The production of a healthier body to withstand (inevitable) deterioration is today achieved through voluntary biomedical interventions and individual efforts (“staying in shape”), supported by new environmental urban planning policies.
Contemporary architecture and urban planning seem to address uncritically the conditions and context in which this discourse on health is developing. In most cases, the design disciplines rely on an abstract, scientific notion of health, and very literally adopt concepts such as “population,” “community,” “citizen,” “nature,” “green,” “development,” “city” and “body” into a professionalized, disciplinary discourse that simply echoes the ambiguities characteristic of current debate. Practitioners also ignore the fact that economic processes are closely intertwined with environmental processes, and especially that concepts of the body, health and sickness are products of history, politics, economics and culture. To properly “diagnose” urban problems, we must not speak of health in abstract terms, but rather of various ideas and states of health. As Jonathan M. Metzl has noted, “‘health’ is a term replete with value judgments, hierarchies and blind assumptions that speak as much about power and privilege as they do about well-being. Health is a desired state, but it is also a prescribed state and an ideological position.” [3]

The book and exhibition Imperfect Health do not represent a comprehensive survey of the relationships between health, architecture, cities and the environment. On the contrary, we mean to highlight some of the uncertainties and contradictions present in ideas of health and health care that are emerging in Western countries today, particularly in Europe and North America.