A Physicist Solves the City 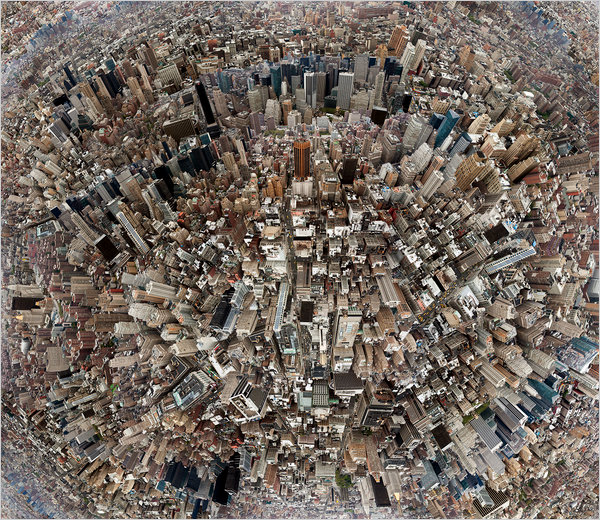 Geoffrey West doesn’t eat lunch. His doctor says he has a mild allergy to food; meals make him sleepy and nauseated. When West is working — when he’s staring at some scribbled equations on scratch paper or gazing out his office window at the high desert in New Mexico — he subsists on black tea and nuts. His gray hair is tousled, and his beard has the longish look of neglect. It’s clear that West regards the mundane needs of everyday life — trimming the whiskers, say — as little more than a set of annoying distractions, drawing him away from a much more interesting set of problems. Sometimes West can seem jealous of his computer, this silent machine with no hungers or moods. All it needs is a power cord.

For West, the world is always most compelling at its most abstract. As a theoretical physicist in search of fundamental laws, he likes to compare his work to that of Kepler, Galileo and Newton. “I’ve always wanted to find the rules that govern everything,” he says. “It’s amazing that such rules exist. It’s even more amazing that we can find them.”

But the 70-year-old West, who grew up in Somerset, England, is no longer trying to solve the physical universe; he’s not interested in deep space or string theory. Although West worked for decades as a physicist at Stanford University and Los Alamos National Laboratory, he started thinking about leaving the field after the financing for the Texas superconducting supercollider was canceled by Congress in 1993. West, however, wasn’t ready to retire, and so he began searching for subjects that needed his skill set.

Eventually he settled on cities: the urban jungle looked chaotic — all those taxi horns and traffic jams — but perhaps it might be found to obey a short list of universal rules. “We spend all this time thinking about cities in terms of their local details, their restaurants and museums and weather,” West says. “I had this hunch that there was something more, that every city was also shaped by a set of hidden laws.”

And so West set out to solve the City. As he points out, this is an intellectual problem with immense practical implications. Urban population growth is the great theme of modern life, one that’s unfolding all across the world, from the factory boomtowns of Southern China to the sprawling favelas of Rio de Janeiro. As a result, for the first time in history, the majority of human beings live in urban areas. (The numbers of city dwellers are far higher in developed countries — the United States, for instance, is 82 percent urbanized.) Furthermore, the pace of urbanization is accelerating as people all over the world flee the countryside and flock to the crowded street.

This relentless urban growth has led to a renewed interest in cities in academia and in government. In February 2009, President Obama established the first White House Office of Urban Affairs, which has been told to develop a “policy agenda for urban America.” Meanwhile, new perspectives have come to the field of urban studies. Macro­economists, for instance, have focused on the role of cities in driving gross domestic product and improving living standards, while psychologists have investigated the impact of city life on self-control and short-term memory. Even architects are moving into the area: Rem Koolhaas, for one, has argued that architects have become so obsessed with pretty buildings that they’ve neglected the vital spaces between them.

But West wasn’t satisfied with any of these approaches. He didn’t want to be constrained by the old methods of social science, and he had little patience for the unconstrained speculations of architects. (West considers urban theory to be a field without principles, comparing it to physics before Kepler pioneered the laws of planetary motion in the 17th century.) Instead, West wanted to begin with a blank page, to study cities as if they had never been studied before. He was tired of urban theory — he wanted to invent urban science.

For West, this first meant trying to gather as much urban data as possible. Along with Luis Bettencourt, another theoretical physicist who had abandoned conventional physics, and a team of disparate researchers, West began scouring libraries and government Web sites for relevant statistics. The scientists downloaded huge files from the Census Bureau, learned about the intricacies of German infrastructure and bought a thick and expensive almanac featuring the provincial cities of China. (Unfortunately, the book was in Mandarin.) They looked at a dizzying array of variables, from the total amount of electrical wire in Frankfurt to the number of college graduates in Boise. They amassed stats on gas stations and personal income, flu outbreaks and homicides, coffee shops and the walking speed of pedestrians.

After two years of analysis, West and Bettencourt discovered that all of these urban variables could be described by a few exquisitely simple equations. For example, if they know the population of a metropolitan area in a given country, they can estimate, with approximately 85 percent accuracy, its average income and the dimensions of its sewer system. These are the laws, they say, that automatically emerge whenever people “agglomerate,” cramming themselves into apartment buildings and subway cars. It doesn’t matter if the place is Manhattan or Manhattan, Kan.: the urban patterns remain the same. West isn’t shy about describing the magnitude of this accomplishment. “What we found are the constants that describe every city,” he says. “I can take these laws and make precise predictions about the number of violent crimes and the surface area of roads in a city in Japan with 200,000 people. I don’t know anything about this city or even where it is or its history, but I can tell you all about it. And the reason I can do that is because every city is really the same.” After a pause, as if reflecting on his hyperbole, West adds: “Look, we all know that every city is unique. That’s all we talk about when we talk about cities, those things that make New York different from L.A., or Tokyo different from Albuquerque. But focusing on those differences misses the point. Sure, there are differences, but different from what? We’ve found the what.”  Read the entire article at : http://www.nytimes.com/2010/12/19/magazine/19Urban_West-t.html?_r=2