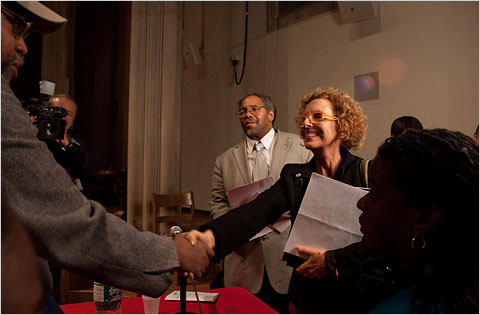 Everybody knows New York City is an expensive place to live. But the United Nations wants to know if affordable housing is so tough to come by that it actually violates human rights.

The United Nations has assigned an official, “a special rapporteur on the right to adequate housing,” to check the city’s affordable housing. The rapporteur, Raquel Rolnik, is to tour the city for the next three days with housing advocates and city officials to “hear the voices of those who are suffering on the ground,” she said.

The United Nations Human Rights Council appoints a rapporteur, or independent experts, to investigate human rights conditions around the world. In the case of Ms. Rolnik, a professor of urban planning at the University of Sao Paulo in Brazil, her “mission” is to tour New York City and six other places in the United States and to report back to the United Nations General Assembly about housing rights violations and advances.

After that, “We send off letters to governments to ask, ‘Is this true? What’s going on?’ and to please intervene,” she said.

Housing advocates will be taking Ms. Rolnik to the Atlantic Yards site in Brooklyn to see the results of the government’s use of eminent domain to seize property; to the New York City Housing Authority’s Grant Houses in Harlem to see how public housing residents live; and to the Bronx to meet residents whose landlords are in foreclosure.

At a town hall meeting last night in Morningside Heights, residents wept and shouted at Ms. Rolnik. They complained about deteriorating public housing, the lack of housing subsidies for AIDS patients, landlord harassment and many other issues, large and small.

She told them: “I am representing the right of adequate housing as a human right.”

One advocate and resident of public housing, Agnes Rivera, wept after telling Ms. Rolnik that Mayor Michael R. Bloomberg “doesn’t care about the poor.” Rob Robinson from Picture the Homeless, a local advocacy group, embraced Ms. Rivera and gazed toward the special rapporteur. Later, Ms. Rolnik hugged a resident herself.

“Affordable housing here is not that affordable,” said Ms. Rolnik, who studied urban history as a New York University doctoral student in the 1980s. Her eyes lit up when talking about inclusionary zoning and other city housing policies. New York is unusual, she pointed out, because it has a city-level obligation to ensure that homeless people have shelter. Now it should make affordable housing a priority, she said.

Ms. Rolnik was appointed as special rapporteur by the United Nations Human Rights Council in May 2008. This is her first official mission.

After her tour of New York City, she will survey the housing situations in Chicago, New Orleans, Los Angeles, Washington, a South Dakota Indian reservation, and Wilkes-Barre, Pa. Her report to the General Assembly is planned for March.

Across the United States, residents may tell her the same stories as those of New Yorkers — of mortgage scams, too many luxury condos and the stigma associated with public housing.

“We have no one to help us,” said Delores Earley, 73, who said her landlord has been trying to push her out of her Harlem rent-stabilized apartment for 20 years. “Somebody has got to know.”